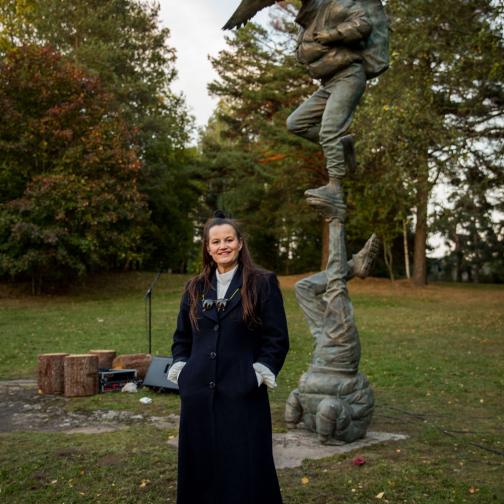 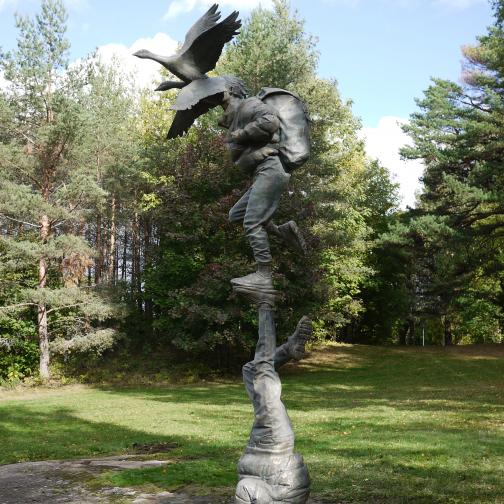 The 4,5 meter tall bronze sculpture Traveler depicts two sportily clad human figures. The bottom-most figure has stuck its head into the ground in search of the underworld. Meanwhile, the second figure balance on the outstretched leg of the first. It’s body stretching towards the sky with a backpack on its shoulders. Two birds replace the top figure’s face, wings spread out as if about to take off.

Wrånes’ sculpture originate from the same ideas and processes as her performative pieces. In her performances, she sculpts bodies, voices and the surrounding space. Costumes and masks are the moulds from which characters and their identity are activated, regardless of their form of presentation.

Hidden or mystical worlds is a recurring theme in Tori Wrånes’ work. With a background in music and theatre, Wrånes has garnered international acclaim for her dreamlike performances where she combines sound, musical instruments, costumes and an ensemble of creature-like characters. The trolls, representing repressed aspects of our own multifaceted personalities, break with the social and physical limitations of daily human life and unabashedly allow their identities to unfold without restriction. The freedom to be whoever and whatever you would like, to explore, feel and travel beyond presumed borders, are fundamental aspects of Wrånes' practice.