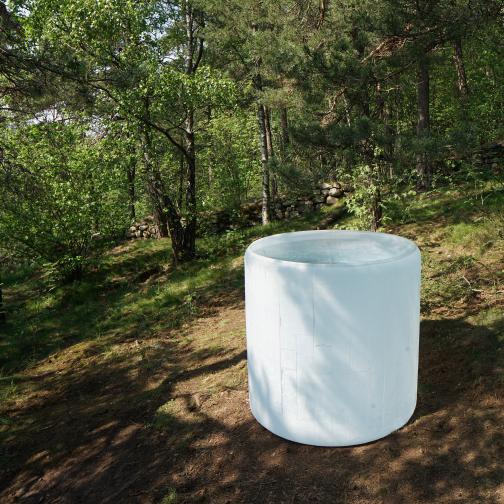 American artist Roni Horn has through a long and solid career marked herself as one of the world's leading contemporary artists. Through drawing, photography, literature, installation, performance and sculpture she deals with themes such as identity, abstraction, perception and the relationship between object and subject.

Horn draws a lot of inspiration from nature and the forces of nature, where changing weather conditions help to adjust the perception of an object and landscape. Air Burial (Oslo), as this work is titled, is part of a series of works of molten and cast glass, which Horn has worked with since the 1990s. At the same time, the glass in Air Burial (Oslo) is covered and transparent, creating a framed space of indefinable content.

The title of the series refers to a Tibetan funeral ritual where the body, lying on a mountain top, is exposed to the elements of nature. Slowly but surely, they become one with the surroundings. Most of Roni Horn's Air Burial works are indoors, while Air Burial (Oslo) is part of a smaller number of works that are placed outdoors. These will break down with time and merge with their surroundings.