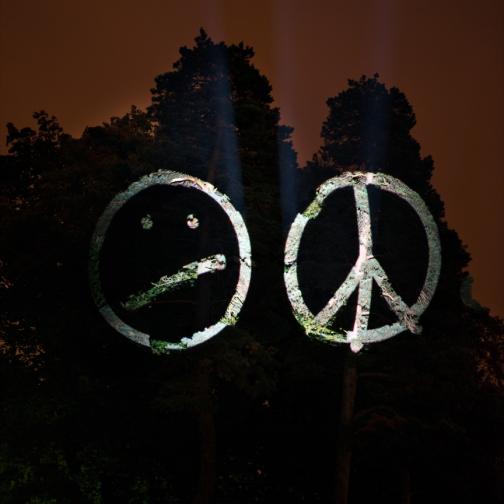 If you wander through Ekebergparken in the evening, an artwork by Tony Oursler will be visible in the trees close to Karlsborg Café and our museum.

The work, called Cognitive & Dissonance, can only be experienced during the twilight and at night in the winter seasons. It consists of sounds and two moving projections in the trees. You have to stand in two spesific areas to listen to the sounds, which consists of a strange dialogue with male and female voices. The projections shows human faces and an array of different symbols.

Tony Oursler (born 1957) is known for installations, videos and performances. He combines light, sound and sculpture in his artworks. He was one of the artists invited by the art council to make a site spesific artwork for Ekebergparken before the park was finished. He made three site spesific works, Cognitive & Dissonance, Klang og Spectral Power.

These artworks are independent installations and can be seen in different parts of the park, but they have a thematic connection. Inspired by the nordic telecomminication, Oursler has combined the cultural heritage and archeological findings of the area that goes back to the last ice age with how humankind have communicated with eachother through the ages. He is specially preoccupied on how we use and are so dependent by technology for communication today.

The projections and sounds which Cognitive & Dissonance consists of is in first glance hard to make sense of, as if the information the artwork want to communicate is lost in a cloud of binary coding.